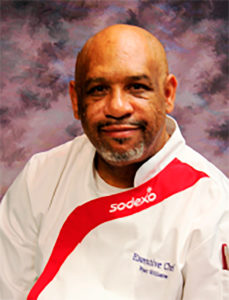 Welcome Chef Wyatt Williams, Executive Chef at Sodexo/Southern Farm Bureau Life in Jackson. We cannot wait to see what he cooks up at the 2018 Bash!

“To be a good chef, one must not only love food and cooking, but also have a love for people as well,” is a favorite saying of Chef Wyatt Williams, who is steadfast in the fact that while being a chef is “awesome,” it also comes with a strict level of responsibility.

For 20 years, Chef Wyatt has honed his professional skills and brings a wealth of knowledge and experience to the culinary world. His expertise spans from exotic dishes to down-home comfort foods. With a straight-forward, yet affable, personality, his respect for wholesome ingredients and passion for cooking shines through his work and reputation. He not only has dazzles his professional peers, but also his clients that range from children to worldwide dignitaries.

His professional background has included practicing his art in the kitchens of the Jackson Marriott, various Mississippi casinos, Sodexo, and the Tupelo Country Club, to name a few. He also has been awarded First Place in numerous culinary competitions. These experiences helped Chef Wyatt form a key understanding that good food enhances deeper, social interactions – a sentiment that he embraces through everything he does, including in his restaurant, his catering company, volunteer projects, and culinary competitions.

One of Chef Wyatt’s greatest professional accomplishment came when he was chosen as one of three chefs by renowned Chef Nick Wallace of Jackson to help cater an event for dignitaries attending the grand opening of the Mississippi Civil Rights Museum this past December.

And when it comes to community service, Chef Wyatt is no stranger! In addition to voluntarily serving as the chef for former First Lady Michelle Obama’s ‘Let’s Move Campaign,’ sponsored by the Boys and Girls Clubs of America, and catering for hundreds attending United Healthcare’s Sesame Street Children’s Health Fair with Cookie Monster, Elmo, and Mississippi Governor Phil Bryant, he also makes time to educate America’s youth and adults on the importance of healthy foods and lifestyles.

For Chef Wyatt, though, he’s most proud of working as chef with the Boys & Girls Clubs. Seeing the children’s faces as he teaches them to learn better eating habits and how to cook healthy dishes is priceless. He says it doesn’t get much better than that.